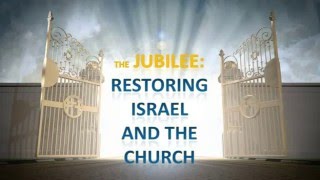 Watch the video
A Jubilee Year of Restoration for Israel and the Church?
Share This

Parallel Restoration Israel and the Church

Both the church and Israel have been through the ‘dark ages’ - a time where they have lost much of their divine inheritance and purpose.

A great parallel process of restoration began for both Israel and the Church from 1897.

Restoration of Signs and Miracles
Israel:
Many Jews had lost faith in God’s power during the holocaust.
It was with the rebirth of Israel in 1948 that a renewed faith in the God of miracles came to many Jewish people.

At the very same time, God was restoring the miraculous to the church as well.
Church: Healings Restored to the Church – ‘Latter Rain revival’ 10 year healing revival from 1947.

Church:
– charismatic revival – unity of the church in the Spirit – now over 600 million spirit filled believers in all sectors of the church.

1967 was a significant year of restoration – for both Israel and the Church.

Russian Return + Revival
The Jews of Russia were trapped behind the Iron Curtain until it finally fell in 1989.
Today over 1 million Russian Jews are back in Israel – just as God said

Restoring a Great Harvest
Israel: Agriculture
Is. 27:6
60% of the land area of Israel is desert – only 20% of land is naturally suitable for growing crops.
Since 1948, Agricultural production in Israel has increased 16 times!

Church: Unprecedented Harvest
50% of all people who have ever believed in Jesus throughout history, have come to faith since the restoration of Israel in 1948. And 70% since the first Zionist congress in 1897!

There has been a dual harvest both in Israel and in the Church. God is restoring His blessing on both!

I believe the secret is found in the Hebrew concept of the Year of Jubilee.
I discovered that it is linked to the ultimate restoration of both Israel and the church – and that it shows us how it will come about.

What is the Year of Jubilee
In the year of Jubilee – God himself redeems his people. He redeems those who could not set themselves free. He restores the land that people could not restore for themselves.

Jubilee and Repentance
When will the jubilee happen? When will this final restoration take place that has been sought for so long?

I believe we can see a hint of it in Peter’s first sermon.
Acts 3:19-21 He explains that the restoration of Israel is still to come

The restoration is linked to repentance.

It is the same with the principle of the jubilee. The jubilee itself links together repentance and restoration.

God has decreed that the Year of Jubilee is not to be proclaimed on the Jewish New Year. Very peculiar!
Instead it is to be announced 10 days later – on the Day of Atonement.
It is a day of fasting and praying, confessing sin and asking God for forgiveness.

In other words – prophetically speaking – I believe the full restoration of Israel and the church that is linked to the jubilee.

From the web shop